With the gracious support of The Library of Congress Asian Division Tibetan Collection in Washington D.C., and in cooperation with the University of Virginia (UVA), TBRC is making available for download a digital version of the Tibetan Kangyur from the Rockhill collection at the Library of Congress. This particular version of the Tibetan Kangyur is a xylographic print from the woodblocks at the Degge Printery in eastern Tibet, printed with the distinct ruby red ink that is a hallmark of this printing house — and is fully searchable within TBRC.

Among the earliest collections of Tibetan literature acquired by the Library of Congress (LC), this version of the Degge Kangyur was first purchased in the fiscal year 1908/09 by the American diplomat, and pioneer Tibetologist, William Woodville Rockhill (1854-1914).

Pages from the Degge Kangyur

Rockhill is among the first American Tibetologists. He was one of the first Americans to read, write, and speak the Tibetan language. As a teenager, he read Abbé Huc's account of his 1844-46 voyage to Lhasa, a book that inspired his later studies and explorations. In 1891, Rockhill embarked on a ten month-journey through Tibet in hopes of reaching Lhasa. Without a map or guide, Rockhill traveled over 8,000 miles, traversing Tibet's deserts, swamps, and glaciers. While he never reached Lhasa, he collected a vast trove of artifacts and texts that would provide a base for the future study of Tibet.

In 1905, President Theodore Roosevelt appointed Rockhill to be the U.S. Minister to China. In the wake of the British Expedition to Tibet led by Colonel Younghusband in 1903/04, Dalai Lama 13 Tubten Gyatso fled central Tibet. After staying at Kumbum Monastery in Amdo, the Dalai Lama traveled to Wutai Shan in China where he met with Rockhill in 1908. This meeting led to the Dalai Lama negotiating a peace treaty with China and Britain. Rockhill and the Dalai Lama continued to correspond for the rest of Rockhill's life. 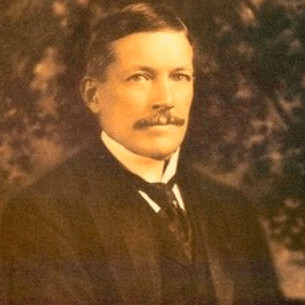 William Woodville Rockhill, one of the first American Tibetologists.

Rockhilll was amongst the earliest to undertake Tibetological research and Tibetan text preservation. Over the course of his life, he cultivated an exceptional library of 65 Tibetan manuscripts, all of which now reside at the LC. Rockhill's gifts to LC, including the precious, rare copy of the Degge Kangyur, contributed to the knowledge of Tibetan literature in the early 20th century.

Having the LC Rockhill version of the Degge Kangyur in the TBRC Library will undoubtedly be a benefit to many. It is not only a great work of Tibetan Buddhist literary achievement, but is also an article of Tibetan-American scholastic and diplomatic history.

TBRC is thrilled to partner with the Library of Congress Asian Division Tibetan Collection to make the texts of the Rockhill collection accessible to lineage-holders, scholars, and Tibetan language reader communities around the world.