The Hunt for the Ragya Kangyur

In collaboration with monks from Ragya Monastery in eastern Tibet, TBRC has digitally preserved an extremely rare woodblock printing of the Tibetan Buddhist canon: the Ragya Kangyur. This marks the end of a diligent, decades-long search for this exceptional (and exceptionally well-hidden) collection.

Tibetan Buddhist Kangyur, core Indian Buddhist canonical text collections, were translated into Tibetan from the late 8th to early 9th centuries and onward, re-translated, edited, and recompiled over the centuries, creating distinct canonical anthologies with textual variation. By the late 13th and early 14th centuries, the Kangyur was conceptualized as a unit of Buddhist canonical texts, and Kangyur collections were carved onto woodblocks starting in the 14th century. From the 15th century onward, with a peak interest in the 18th century in eastern Tibet, printing houses carved their own redactions of the Kangyur. The printing of these carved works served both as a display of wealth for patrons and monastery libraries, as well as acts of cultural and literary preservation.

Consequently, there are distinct localized canonical collections at monasteries and palaces across the Tibetan cultural world. Among these is an exceptionally rare woodblock printing of a local canonical collection from Ragya Monastery in the Amdo Golok region of eastern Tibet — known as the Ragya Kangyur (rwa rgya bka' 'gyur). It is the only copy known to exist.

Though the texts of this particular Kangyur started to be carved onto wood blocks in the year 1814 under the patronage of the founder of Ragya Monastery, Shingza Pandita Lozang Dargye Gyatso (1759-1824), based on the Degge Kangyur, the wood carving took seven years and was not completed until 1820. The Ragya Kangyur was then hidden for centuries and was only recently rediscovered in 2014 — exactly 200 years after it was first engraved into wood!

While Ragya Monastery, the monastery where the original xylographs were carved and housed, had records of its existence and its presence was vivid in the memories of a few elders in the local community, the monastery no longer had access to its Kangyur. The woodblocks at Ragya Monastery were destroyed during the Cultural Revolution, and it was thought to have vanished. 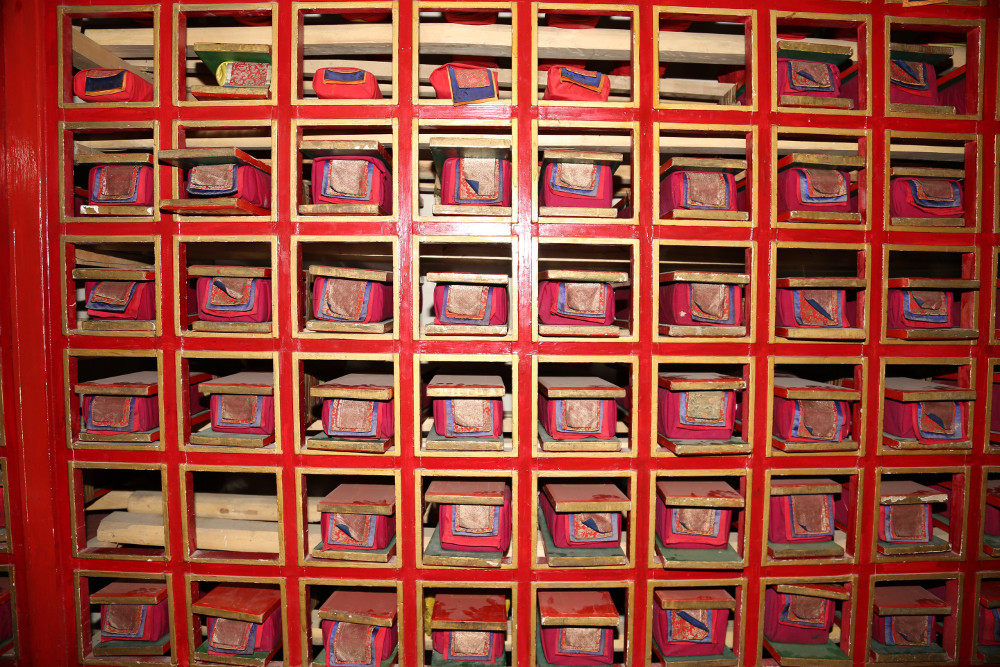 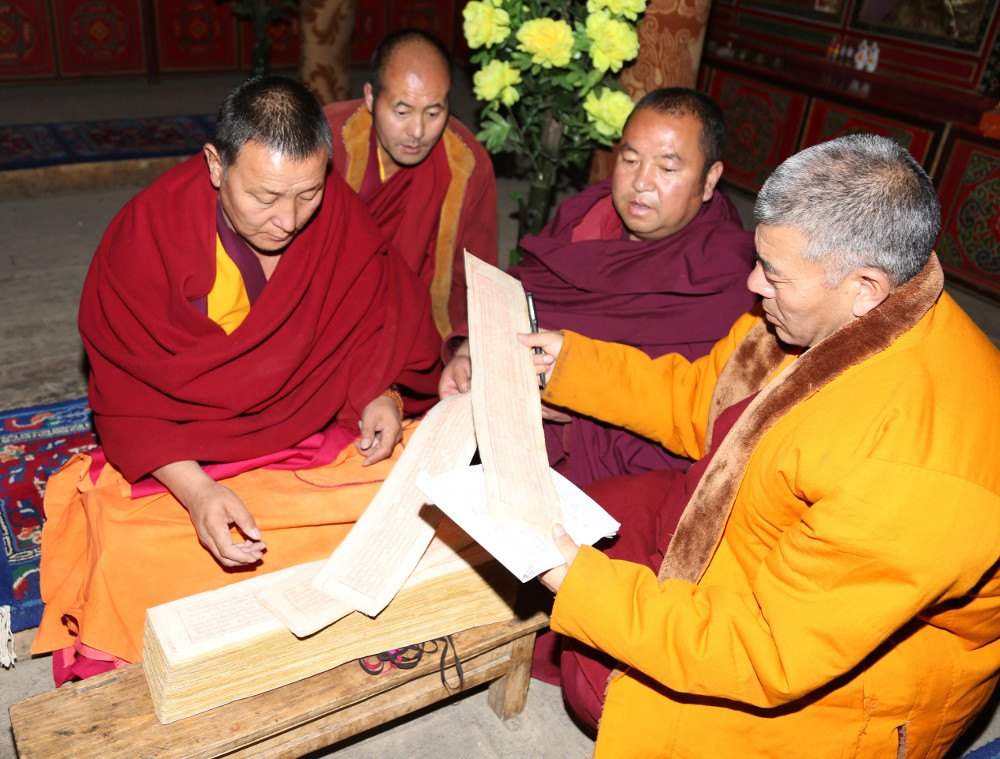 In the late 1990s, monks at Ragya Monastery wanted to reprint the Ragya Kangyur. However without the original printing blocks, a paper copy or a digital version, this project was not possible. A senior scholar monk, Jigme Gyaltsen, the founder and principal of Ragya Sherik Norbu Ling school, set out to find the Ragya Kangyur in order to repatriate its textual legacy for the monastery, and complete this republication project.

As a child monk, he recalled his teacher telling him that a print of the Ragya Kangyur existed. His teacher described its location to him. Though he vividly recalled his teacher's message about its existence, he could only recall the general region where it was kept. In this region in Amdo, there are more than seventy monasteries. It's about one day's drive from Ragya Monastery.

The monk shared this memorable anecdote with TBRC:

One day when he was a young man, a monk from another monastery came to visit his teacher. The monk brought a horse and carriage to gift his teacher. He recalled his teacher pointing to the horse carriage and teasing him, saying, "You can take this 'car' to go see the Ragya Kangyur."

In his search, the monk was spurred on by his fond memory of this instance.

Since the late 1990s, Jigme Gyaltsen traveled throughout this region on a hunt for the Ragya Kangyur. He went to the monasteries in the region and asked local elders who might recall seeing it, seeking whatever information he could. Most of the persons whom he met thought it was lost, but he kept the words of his teacher in his mind and remained convinced of its survival. 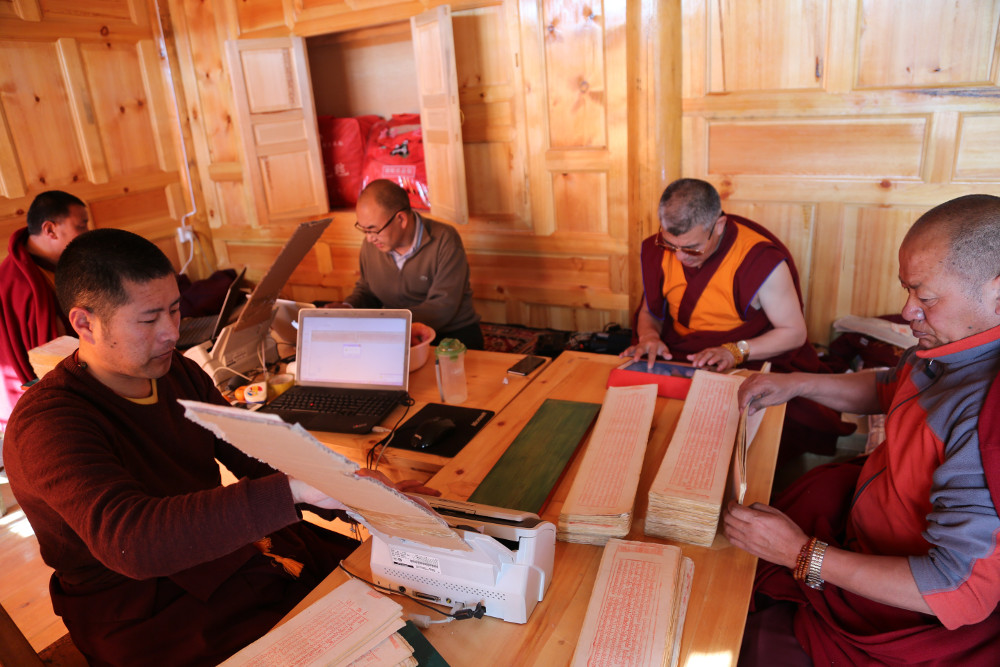 In 2010, after council from a senior Tibetan master, Alak Zenkar Rinpoche, who is familiar with the landscape of literature in Tibet, the Ragya monk started to visit every place in the region where a stupa or reliquary was recently constructed — with the hope that the Ragya Kangyur was possibly hidden inside for safe keeping.

During September 2013, Jigme Gyaltsen heard about a monastery that had numerous texts. He visited the monastery and asked to see what looked like a canonical collection. The monks refused to let him look at the books, but he returned later and took a volume off the shelf. Opening it up, he found that it was in fact the Ragya Kangyur.

On Christmas Eve of last year, days after the monk was notified about permission to scan the Kangyur, through Alak Zenkar Rinpoche, TBRC was contacted about this discovery and asked to assist with its digital preservation. The TBRC team was dispatched right away from our office in Chengdu to the monastery in eastern Tibet where the collection is being kept safe. Monks from Ragya Monastery worked with the TBRC team around the clock for eighteen days to scan this unique canonical collection consisting of 104-volumes, totaling 66,156 pages.

The Ragya Kangyur is now available to read and download from the TBRC Library.