Today we're featuring new acquisitions of texts from the Kagyu School of Tibetan Buddhism. BDRC founder Gene Smith championed Kagyu literary heritage and had fruitful relations with many Kagyu lamas. One of his first lamas in India was the great Drukpa master Tuksey Rinpoche (1916-1983). In the mid-1960s Gene studied with Thuksey Rinpoche at Dali Gompa in Darjeeling and they subsequently maintained a years long correspondence (as seen in the photo above). Gene was also close with H.H. the sixteenth Karmapa and consulted on the production of H.H.'s "vermillion edition" of the Derge Kangyur, among other publications. On one of Gene's final trips to India he was a guest of honor at H.H. Drikung Kyabgon Chetsang Rinpoche's Songtsen Library in Dehradun. Gene made a lasting impact on the library by setting up a computer station with TBRC's digital materials.

Before introducing some of our newest acquisitions of rare and classic Kagyu texts, we might remind ourselves of all of Gene's scholarly contributions to the study of the Kagyu School. Gene's writings about Tibetan literature, lineages, society, and philology have been a mainstay of the field for nearly 50 years. As everyone reading this knows, Kurtis Schaeffer, who is now BDRC's board president, edited and published a selection of Gene's essays in the book Among Tibetan Texts (2001).

The opening lines of a personal letter written to Gene Smith by his Kagyu lama Thuksey Rinpoche. "To his excellency, the great Gene Smith, endowed with the brilliance of a hundred bodies of knowledge and whose compassion is incomparable." The letter is dated 1975 and thanks Gene for his assistance on the publication of the Collected Works of Pema Karpo.

What made Gene such an influential scholar to his worldwide readership was his ecumenicism—he spoke as an expert to scholars of each of the major traditions of Tibetan Buddhism. Nevertheless, the argument can be made that Gene's writings were more consequential for the academic study of the Kagyu School than for the other sects. His "The Life of Gtsang smyon Heruka" made possible volumes of scholarship on Tibetan printing, crazy yogis, 15th-century Tibetan history, and, most of all, The Life of Milarepa, the masterpiece of Tibetan literature. "The Diaries of Si tu Paṇ chen" was a watershed in our understanding of Tibetan autobiographical writing, Tibetan engagement with Indic literary arts (including translation and editorial practices), and the cultural history of Kham. One can draw a direct line between the appearance of this essay in 1968 and, 40 years later, the Rubin Museum of Art's landmark exhibition and conference Patron and Painter: Situ Panchen and the Revival of the Encampment Style (2009).

Another of Gene's path-breaking essays about the Kagyu school was his opus on Jamgön Kongtrul. Nearly every sentence of this work inspires the reader to explore the vibrant scene in and around Palpung Gompa during the long 19th century. Multiple books and dissertations have been based on this essay but there is yet more to be revealed from this matrix.

Below are several highlights from BDRC's recent acquisitions of Kagyu texts. It is a feast for scholars (mkhas pa'i dga' ston) and practitioners, and it's hoped everyone will approach them informed by Gene's insights.

If you find the work BDRC does valuable, please consider making a tax-deductible donation to our spring fundraising campaign. Your gifts will help us continue to preserve Buddhist literature and make it freely available. 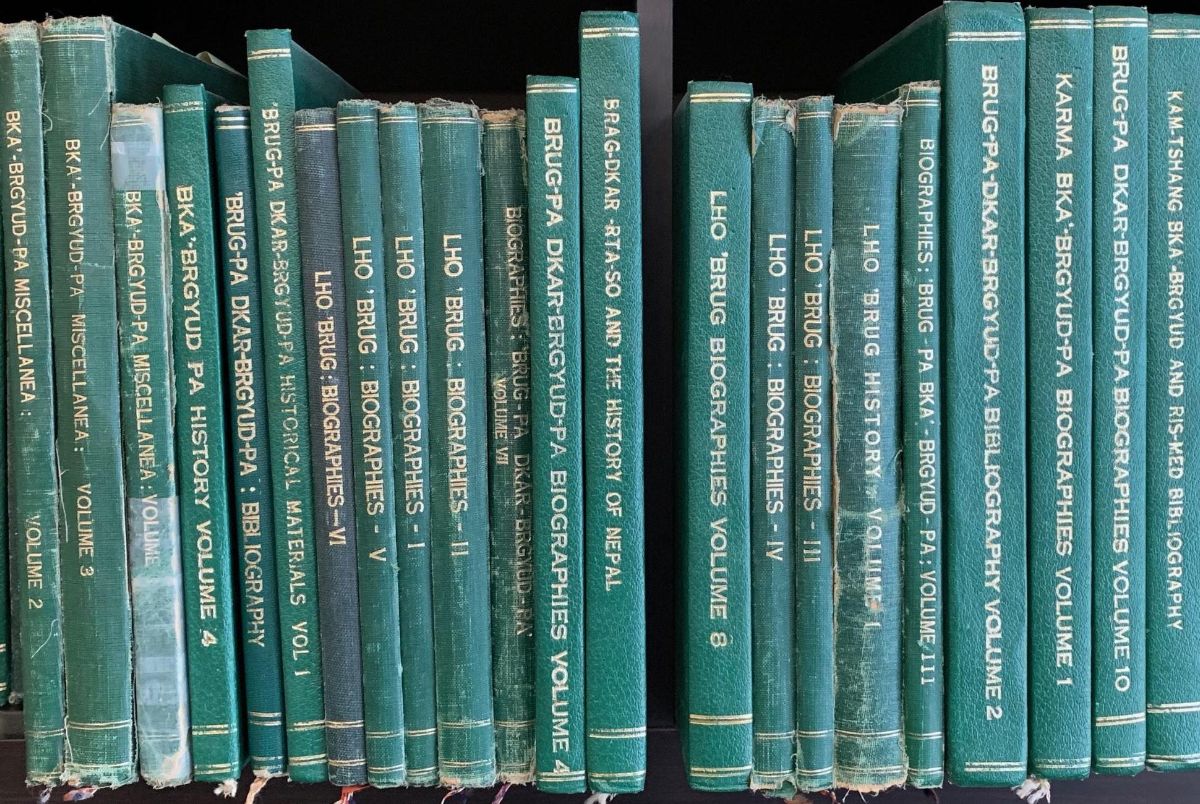 Some of Gene's personal notebooks about Kagyu history and literature.

མི་ཉག་འཇམ་དབྱངས་གྲགས་པའི་གསུང་འབུམ། The only known copy of the Collected Works of Minyak Jamyang Drakpa, a 14th century scholar from Minyak, Kham, who belonged to the Kagyu and Sakya traditions.

གསུང་འབུམ། འོད་དཔག་རྡོ་རྗེ། The only known copy of the Collected Works of Öpak Dorje (14th cent.). This 3-volume set contains his works that are included in the gdams ngag mdzod and much more.

དོ་ཧ་སྐོར་གསུམ་གྱི་ཊཱི་ཀ་སེམས་ཀྱི་རྣམ་ཐར་སྟོན་པའི་མེ་ལོང་། The only available xylograph edition of this classic commentary on Three Cycles of Doha composed by Saraha. This copy runs to over 200 folio sides but ends midway through the Song for the King (rgyal po do ha). Hopefully we will locate the rest of the text in the future.

བྱ་བཏང་ནམ་མཁའ་འོད་ཟེར་གྱི་རྣམ་ཐར་དང་མགུར་འབུམ། A richly-illustrated manuscript of the Autobiography and Songs of Drukpa Kagyu master Namkha Özer (15th cent.). BDRC does not have any other works by this obscure figure.

ནམ་མཁའ་རྡོ་རྗེའི་མགུར་འབུམ། Bara Kagyu master's biography was published in 1970 but this is the first occasion in modern times that his Collection of Songs has been widely available. This xylograph is obviously hundreds of years old; the Songs are found on pages 3-49.

རྣལ་འབྱོར་པ་ངག་དབང་དོན་ཡོད་རྒྱ་མཚོའི་རང་རྣམ་སོགས། The Autobiography and selected writings of Drukpa Kagyu yogi Ngawang Donyö Gyatso (16th cent.). BDRC does not have any other writings by him.

བླ་མ་དམ་པ་ཆོས་ལེགས་ཀྱི་རྣམ་ཐར་དང་གྲོལ་ལམ་གསལ་བྱེད་སྙིང་གཏམ་རིན་ཆེན་ཕྲེང་བ། The biography and writings of the obscure Mahamudra master Chölek (1437-1521).

གྲུབ་ཐོབ་ཆེན་པོ་ཉག་རེ་སེ་བོའི་གསུང་འབུམ་ཤིན་ཏུ་ངོ་མཚར་བ། A disciple of Pakmodrupa and Jikten Gonpo. This collection is twice the length of the only other known copy of his writings.

རྗེ་འབའ་ར་བ་གསུང་འབུམ་ཆེནནཔོ། A complete edition of the Collected writings of Barawa Gyaltshen Palzang (1310-1391) the founder of Bara Kagyu lineage.