In his obituary for BDRC's founder Gene Smith, Tashi Tsering Josayma, a well-known scholar of Tibetan literature and society, wrote that "…(Smith) was appalled to see in Nepal in the mid-1960s that rare and precious manuscripts of Tibetan art, culture, literature, medicine and philosophy were being sold on the streets of Kathmandu." Following Gene's founding vision, BDRC doesn't solely focus on the preservation of strictly religious texts, but rather seeks out texts that reflect the full richness of Buddhist culture— including, for example, Medical and Astrological works in the Tibetan language. 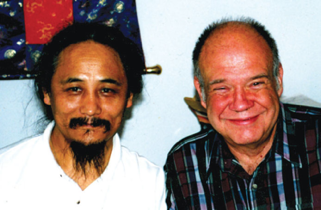 BDRC's holdings in Tibetan astro-medicine are extensive. BDRC has archived dozens of works from the PL-480 collection, as well as many works acquired from Tibet. Of the works from Tibet BDRC has many volumes of manuscripts and xylography that were scanned on-site at monasteries and personal libraries, as well as hundreds of volumes of medical treatises that were reprinted in modern book form. No other web resource offers such a vast and profound—and free —collection of Tibetan medical knowledge. Further research is required to identify previously unknown texts or rare editions of medical classics.

A few notable items from the Tibetan medicine and astrology tradition that BDRC makes freely available to all scholars and practitioners are:

བོད་ལུགས་གསོ་རིག་རྩ་ཆེའི་དཔེ་རྙིང་ཀུན་བཏུས། (W2PD17386), Reproductions of a collection of rare Tibetan medical sciences texts preserved at the Potala Palace, Lhasa. This collection comprises 30 volumes and is fully outlined for easy browsing and navigation. 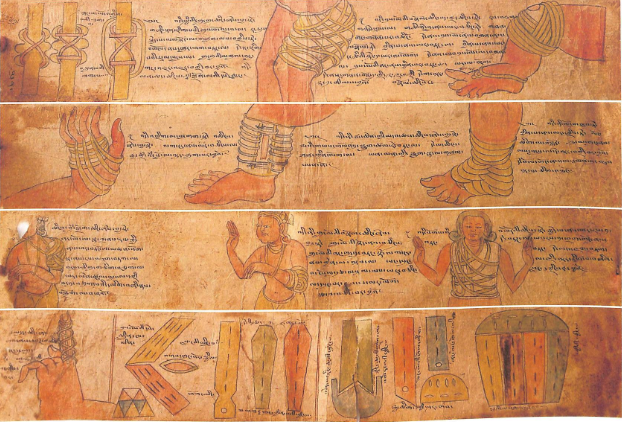 གཙོས་ནས་བསྡུ་རུབ་བྱས་པའི་གསོ་རིག་སྐོར་གྱི་དཔེ་ཆ། (BDRC W3MS33), 7 volumes of medical texts digitized on-site in the village of Tsö, Amdo. This set of texts offers a privileged view into Tibetan medicine as it is (was?) practiced at the local level.

In an introduction to the publication of a xylograph reproduction (1968) of the diaries of Situ Panchen (1700-1774), Gene Smith commented that Situ's monastery at Palpung in East Tibet "produced … a generation of talented physicians who would dominate the medical field in Tibet for a generation to come." (see BDRC W00KG09387 p.8) Smith went on to state that "The renewed interest in … Chinese and Indian systems of astronomy and astrology are some of Situ's most important legacies to Tibet." A collection of medical manuscripts were scanned onsite at Situ's monastery at Palpung. The manuscripts contain unique features, such as annotations and seals from the offices of high lamas.

The volumes have carved covers.

ཀོང་རྩེ་འཕྲུལ་རྒྱལ་ལུགས་ཀྱི་རྣམ་མཐོང་གསལ་བའི་སྒྲོན་མེ་ལེགས་ཉེས་འབྱེད་པའི་མེ་ལོང་། (BDRC W8LS32686), a richly-illustrated manuscript from the Bön tradition on prediction (mo) and Chinese astrological calculation, including works representing the Bön tradition known as "Confucius King of Magic" (Kong tse 'phrul gyi rgyal po). One sample of the many paintings in this text:

A delightful series of pharmacopeia illustrations within a large collection of 82 volumes of medical texts, བོད་ཀྱི་སྨན་རྩིས་ཀྱི་དཔེ་དཀོན་དཔེ་རྙིང་ཕྱོགས་བསྒྲིགས།, (BDRC W2PD17476). These texts were digitized in Tibet around 2015 at various sites and then compiled into this work record.

ཤེལ་གོང་ཤེལ་ཕྲེང་། (W2PD17470) A pair of materia medica treatises written by དེའུ་དམར་དགེ་བཤེས་བསྟན་འཛིན་ཕུན་ཚོགས། (b. 1672), teacher on medical matters to Situ Panchen. The two texts together became known as the Shel gong shel phreng, their two titles respectively are བདུད་དད་གཞོམ་པའི་གཉེན་པོ་རྩི་སྨན་གྱི་ནུས་པ་རྐྱང་བཤད་གསལ་སྟོན་དྲི་མེད་ཤེལ་གོང་།, and བདུད་རྩི་སྨན་གྱི་རྣམ་དབྱེ་ངོ་བོ་ནུས་མིང་རྒྱས་པར་བཤད་པ་དྲི་མེད་ཤེལ་འཕྲེང་། This is a copy of the original Dege prints of this classic, which was then recarved in Lhasa at Chakpori Medical College and from there disseminated far and wide, including to Mongolia.

A fuller description of this work is found here