The Buddhist Digital Resource Center was recently honored, on November 30, with a personal visit from His Holiness the 42nd Sakya Trizin, Ratna Vajra Rinpoche, the head of the Sakya tradition of Tibetan Buddhism. Our Executive Director Jann Ronis and our expert librarians gave Sakya Trizin Rinpoche a demonstration of our new online library, the innovative BUDA platform, which Rinpoche took great interest in.

Sakya Trizin Rinpoche spent an hour and a half avidly looking through our online library with Dr. Jann Ronis and the librarians. Among the many texts discussed was the Collected Works by Panchen Shakya Chokden. Sakya Trizin Rinpoche was also kind enough to perform a consecration of our new location at 210 South Street, which will feature a reading room and events space. 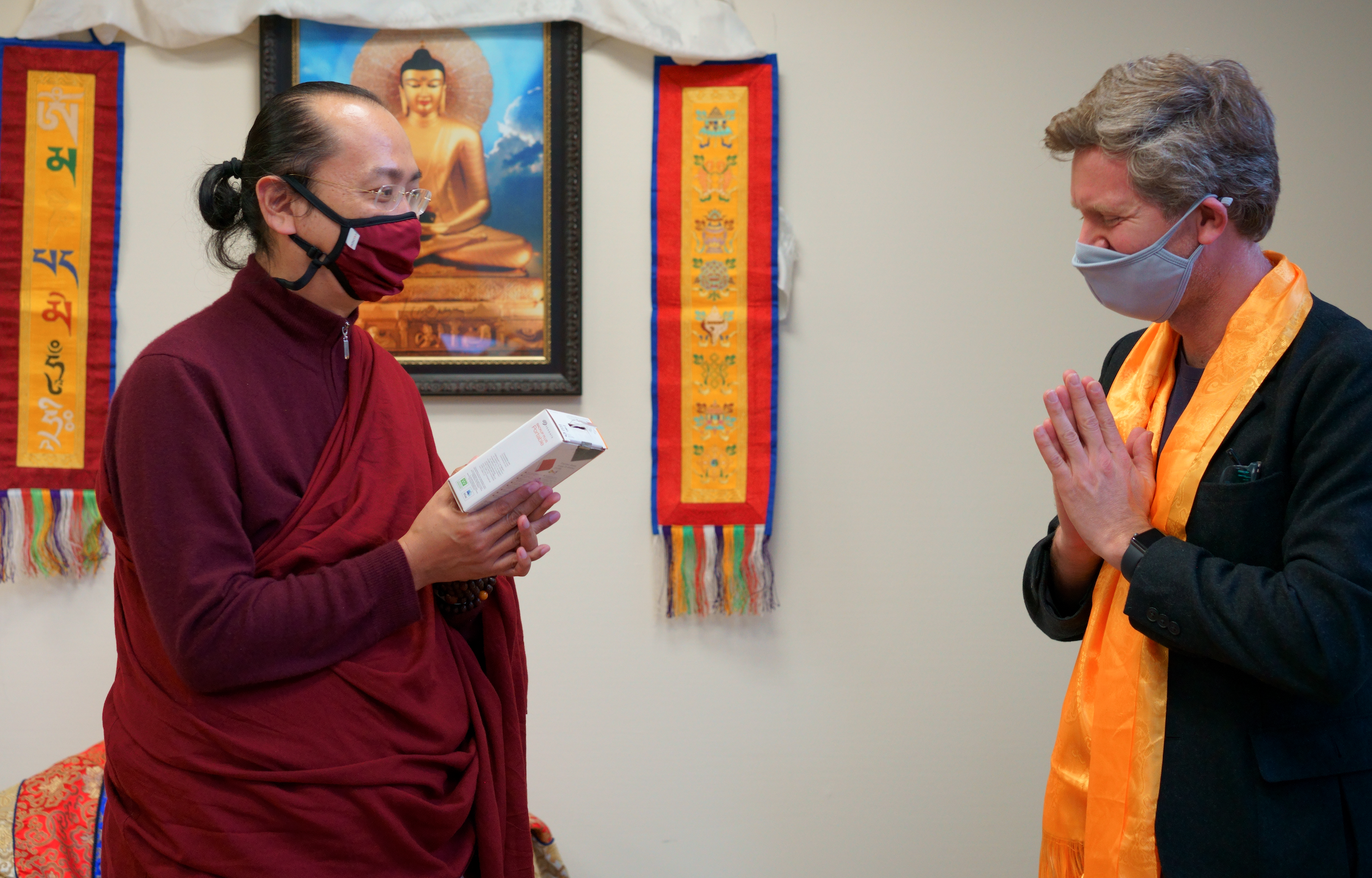 Sakya Trizin gave us, in the fall, a wonderful letter commemorating the work of BDRC in which he said, "In one's journey of gaining experience as a scholar or a practitioner, it is vital that one studies not just a single treatise, but numerous different texts in order to enhance one's knowledge, practice and experience of the Dharma. It is praiseworthy that the BDRC should offer us the possibility to study manuscripts belonging to all major religious schools of Tibet. BDRC also provides a platform for future scholars to study and share their experiential understanding, thereby bringing about a new dawn of peace in the world as a fruitful consequence." 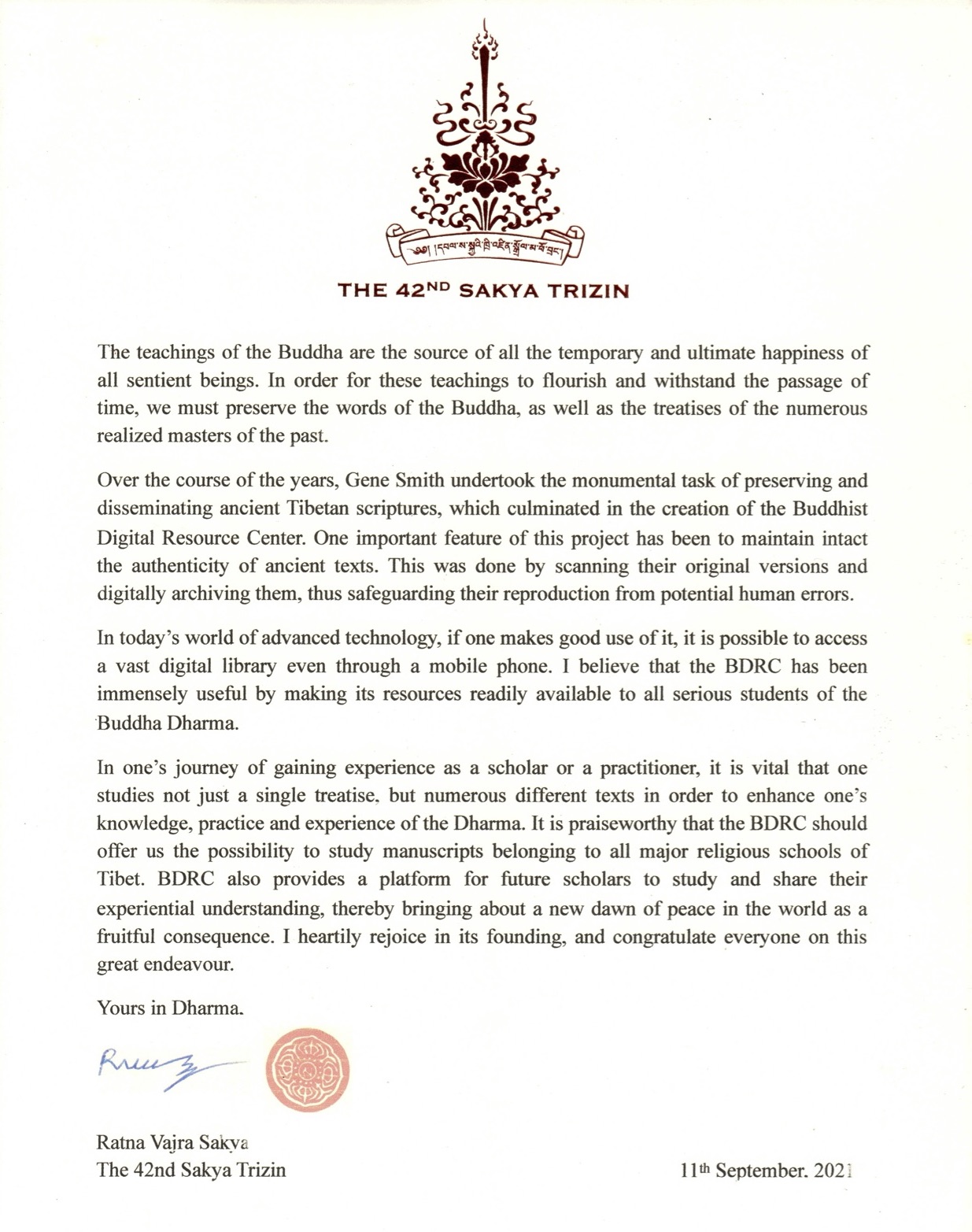 HH Sakya Trizin's kind letter to BDRC encouraging and supporting the critical work that we do.

The Sakyas understand the role of innovation and adaptation in forging a new path for the Dharma. Beginning in 2017, the Sakyas instituted a historic change in leadership structure. Instead of a lifetime tenure in each generation being held by either the Dolma Phodrang or Phuntsok Phodrang Labrang of the Sakyas, with the ascendancy of the 42nd Sakya Trizin, the Sakya Throneholder role began to be held for a rotating period of three years instead of as a lifetime tenure, by all qualified members of the Sakya family. The circular announcing this sea change said, "This assuredly will cause increased stability in the continuation of the teachings and administration of the Sakya."

The Sakya tradition, dating back to the 11th century, is the oldest Buddhist tradition of Tibet.  This change marks not only a new path forward for the Sakyas, but a new and more resilient model of Buddhist leadership for the 21st century. It was the great master Jamyang Khyentse Chokyi Lodro himself who suggested this change, recommending the leadership structure of the Ngor, itself a branch of the Sakya tradition. 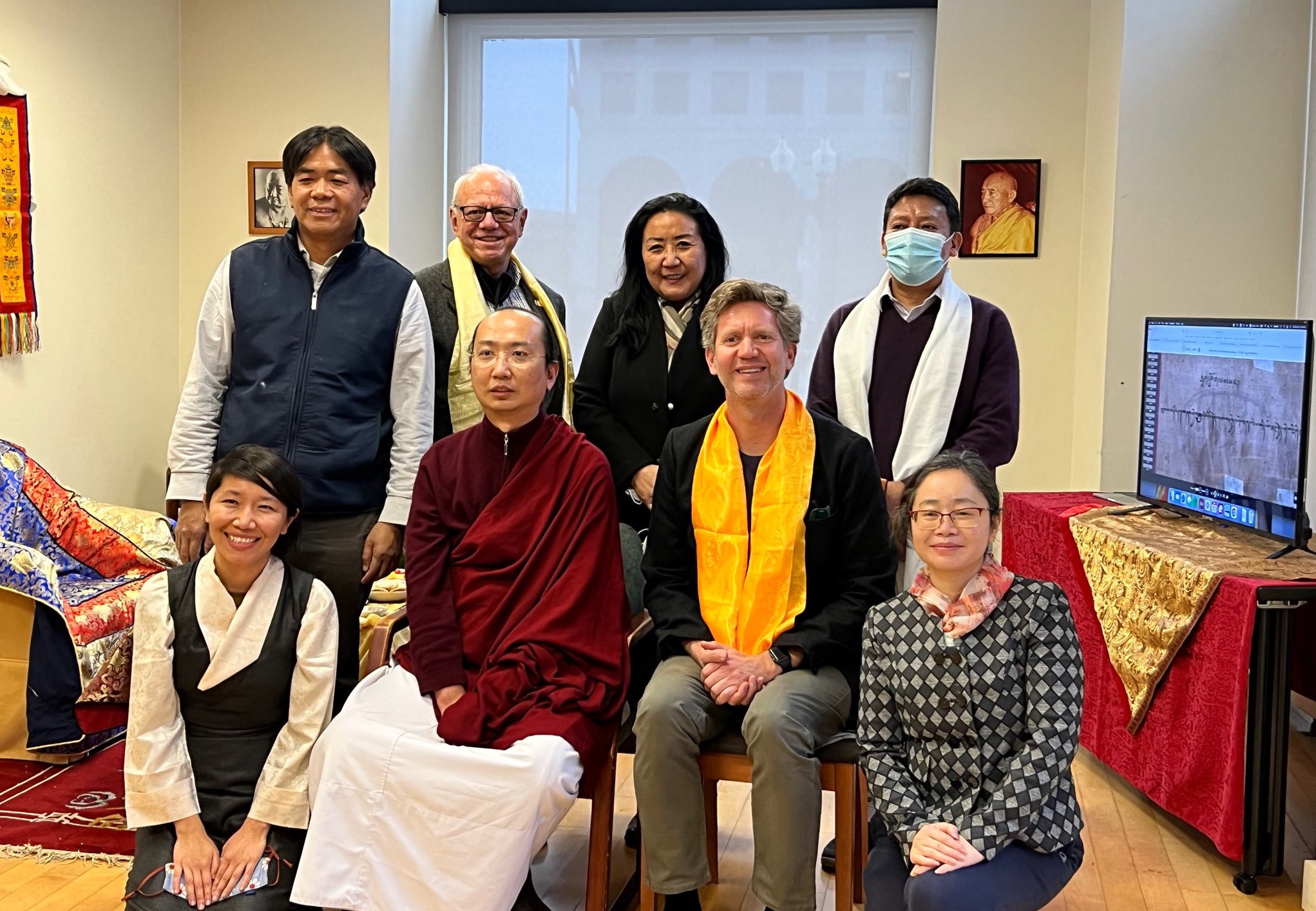 Our founder Gene Smith was close to the Sakya family, and on one of his last trips to India to be a guest at the Sakya graduation ceremony at Lumbini, he met with the 41st Sakya Trizin to talk about hopes and dreams for the future. The 42nd Sakya Trizin represents those hopes and dreams, and symbolizes the change, innovation and resilience of the Buddha Dharma.

What the Sakyas have modeled is a new and more resilient model of Buddhist leadership for the 21st century. From Vulture Peak to palm leaf, and printing press to PDF, the history of Dharma transmission is a story of evolution and innovation. We at BDRC know that better than anyone. 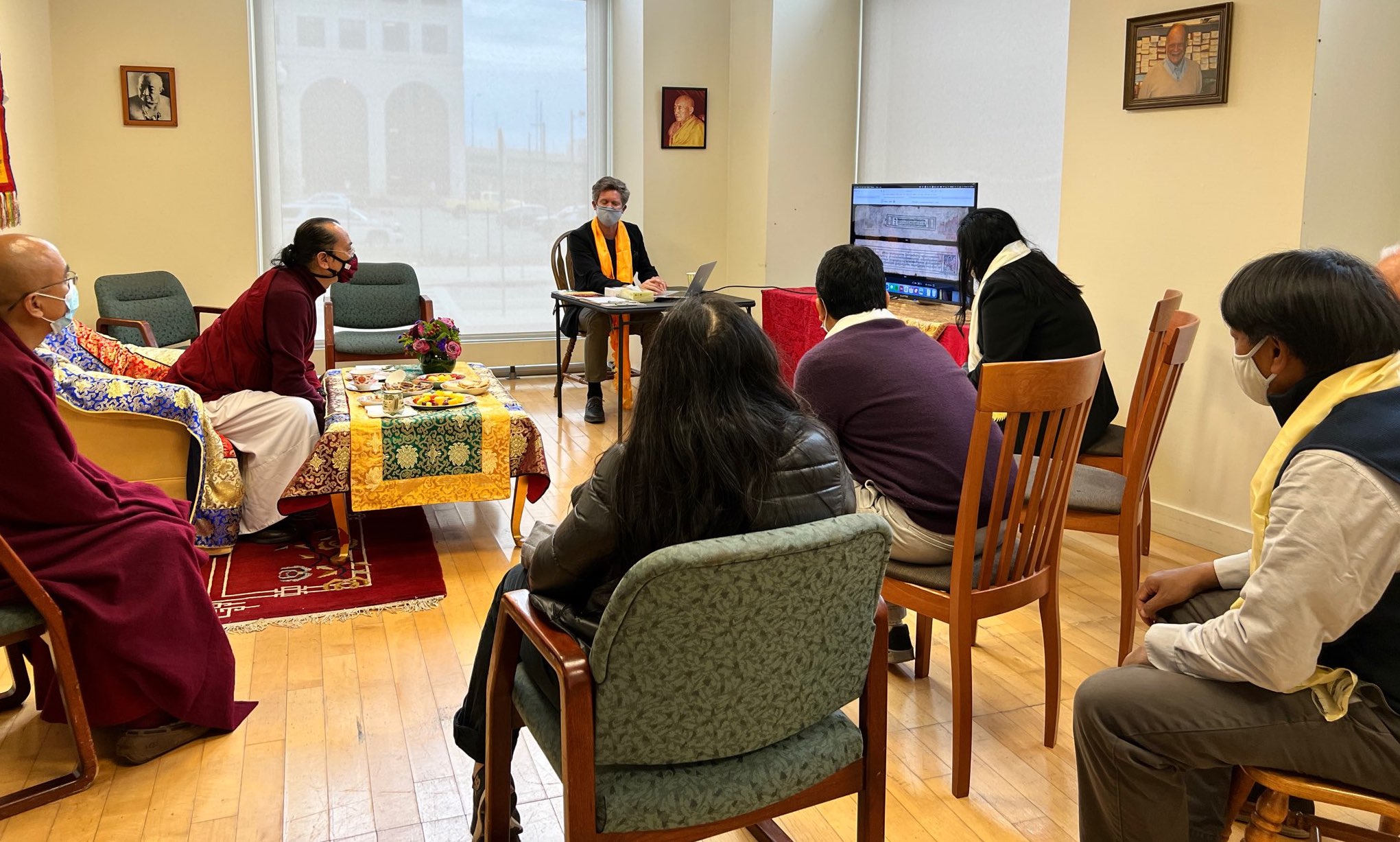 Sakya Trizin Rinpoche spent an hour and a half looking through our online library with Executive Director Jann Ronis and our expert librarians.