What the Buddhist Digital Archives Offers Scholars: A Case Study in Pali Literature 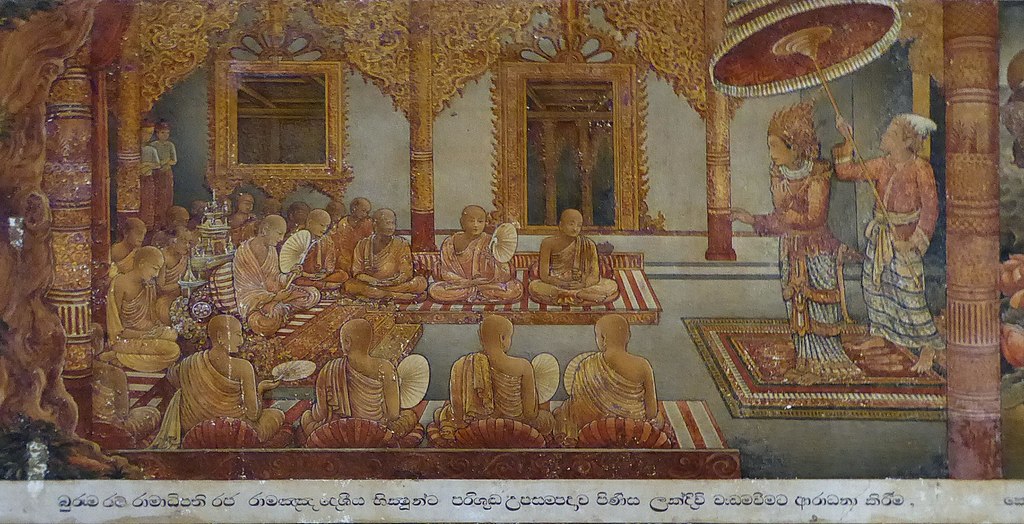 The King of Burma Inviting the Ramañña Monks to Receive Ordination in Sri Lanka. Photo from Sadao, Thailand, via Wikimedia Commons.

Dr. Petra Kieffer-Pülz is a scholar of Pali literature who has been studying a monastic boundary dispute in Sri Lanka for the past five years. Monastic boundaries, called sīmā, are crucial because a proper sīmā is absolutely necessary for ordaining new monks. The sīmā is, therefore, one of the preconditions for the continued existence of the sangha.

The status of a monk does not exist without full
Ordination, and full ordination does not exist
Without the valid attainment of a monastic
Boundary.

Dr. Kieffer-Pülz is a member of BDRC's Board of Advisors and an avid user of our archive of Southeast Asian manuscripts. Below she shares with us her account of an exciting discovery made amongst the rare Burmese works that belong to Peter Skilling's Fragile Palm Leaves initiative and which were digitized by BDRC and made available on BUDA.

I am an Indologist, and my primary field of research is the Pāli literature of the Theravāda Buddhist traditions of South and Southeast Asia. My present project — located at the Academy of Sciences and Literature, Mainz, Germany — is "The Dispute about the Validity of the Monastic Boundary (sīmā) of Balapiṭiya in 19th century Sri Lanka".

In the context of this dispute, which spanned more than three decades (ca. 1850 to at least 1884), a large number of letters and texts were written in the middle-Indic language Pāli, in addition to letters, texts and commentaries in vernacular languages (Sinhalese and Burmese). The monastic boundary (sīmā) at stake was the one established on the river Mādu Gaṅga in the village of Balapiṭiya, in the Southwest of Sri Lanka, by the group who brought an ordination lineage from Burma in 1903. It was the first sīmā of the Amarapuranikāya in Sri Lanka, and was used by the monastic inhabitants of the Ambagahapitiye vihāra.

There exist various types of monastic boundaries, and the Balapiṭiya sīmā was of the udakukkhepasīmā type. This is a "monastic boundary [established by] throwing water [or sand around the assembled community]". Such sīmās are used in bodies of water (river, ocean and natural lake), where a local community (saṅgha) can assemble directly in the water or on a permanent platform, or on a boat, raft, etc.  The platform on which a saṅgha assembles may be permanent, but the boundary is not. It is defined each time before a legal act is to be carried out, and it runs to where the water thrown from the edge of the platform hits the surface. If there are any connections between the area enclosed within a sīmā and other areas that might also function as monastic boundaries, like, for instance, a village boundary, the space is no longer clearly demarcated, but the boundary is considered flawed and the legal acts carried out within it invalid. This is especially important in connection with ordination ceremonies. Because of the importance of the sīmā for the continuance of the Buddhist tradition, many disputes about the validity of sīmās arose in the course of the history of Buddhism.

Inscriptions in Roman and Sinhalese script, at a foundation monastery of the Amarapuranikāya in Sri Lanka.

Now concerning the monastic boundary of Balapiṭiya, in 1851 a dispute arose between two groups of the Amarapuranikāya. In 1845 the platform had been extended to accommodate a larger number of monks which resulted from the unification of originally two monastic groups. In addition a bridge was built in order to facilitate the monks's walk to the platform. This bridge was not connected to the platform itself, but the end of the bridge reached into the area demarcated by throwing water all around the assembly, that is, in the actual sīmā area. Because of this, one group considered the monastic boundary as connected to the bank of the river (which always counts as village boundary), and thus as confused with the village boundary, which meant that the sīmā was flawed and the legal acts carried out within the space invalid.

Some of the letters and texts written in the frame of this dispute have been available to scholars for a long time. Thus the first formal letter of the Burmese saṅgharāja, sent with the initial delegation, was published by the Russian Indologist I. P. Minayeff, in 1887 in the Journal of the Pali Text Society, based on a single manuscript which he had received during his travel to Sri Lanka in 1874.

Two other texts, written by Sinhalese monks representing the two disputing parties were published in Sinhalese script in 1880 (Vimalasāra, Sīmālakkhaṇadīpanī) and in 1884 (Dhammālaṅkāra, Sīmānayadappana) in Sri Lanka. Though there must have been many copies at that time, it was not easy to find complete and readable versions. From the Sīmānayadappana it became clear that the saṅgharāja did not issue only one written judgment, the first formal letter, called Sīmāvivādavinicchayakathā, but at least a second and a third. Since the author of the Sīmānayadappana also quotes from these texts, it was clear that the version published by Minayeff was the first. But there were no copies of the second and third written judgments available.

In 2015 I visited Sri Lanka in connection with this project with the aim of finding manuscripts of these other texts by the saṅgharāja. Since they are mentioned with titles such as Sīmāvinicchaya in the Sīmānayadappana, I checked manuscripts with titles containing sīmā in all monastery libraries where I was allowed to access the manuscripts. This was made possible by the generosity of the various vihārādhipatis who not only allowed me to search their monastery libraries, but also helped me to find the manuscripts and allowed me to photograph them. Unfortunately none of the Sīmāvinicchaya texts I found was connected to the Balapiṭiya sīmā. But the search was not in vain.

Many of the manuscripts I found contained the text of the Sīmālaṅkārasaṅgaha of the Sinhalese author Vācissara (13th c. CE).  In addition to the manuscripts found in Sri Lanka, I was aware of two further manuscripts of this text in the Fragile Palm Leaves collection. But at that time it was not yet possible to access them online. Only in 2020 I was able to read these manuscripts via the BDRC online library which made them accessible in excellent reproductions (FPL 4345.4 and FPL 9466.3). As I was able to also consult these manuscripts through BDRC, this led to the publication of Vācissara's text with a translation in spring 2021 (A Manual of the Adornment of the Monastic Boundary, Wiesbaden 2021). Though this text is not connected to the Balapiṭiya dispute, it is not without interest also in connection with the later, since the two Sinhalese monks who wrote their sīmā texts in the 1880s both made use of this 13th century text.

A multi-text manuscript from the Fragile Palm Leaves collection containing a formal letter from the Burmese saṅgharāja pertaining to the Balapiṭiya dispute. BDRC RID: FPL 4609.

Returning to the Balapiṭiya dispute: from searching secondary literature it became obvious that the position of the group who considered the sīmā to be pure was not examined in detail. Whether that was because this was not the orthodox position or whether people simply did not have access to the writings which dealt more closely with the positions of this second group is unclear. But recently my colleague Alexey Kirichenko (Moscow State University) directed my attention to a multi-text manuscript of the Fragile Palm Leaf collection (FPL 4609) accessible in BUDA. It contained not only one of the other formal letters of the Burmese saṅgharāja, namely the one he had given to the second delegation, but also a commentary on it, as well as another important text connected to the Balapiṭiya dispute. The titles of the works as given on the label of the manuscript and in the catalogue of the FPL collection did not make clear what kind of texts were to be expected. But Alexey Kirichenko, who is currently a research fellow with BDRC, had identified the texts, and kindly provided me with the relevant information.

Thanks to BDRC's efforts in digitizing the FPL collection and making it accessible in BUDA, I was able to immediately download the excellent scan of the manuscript, and to transliterate the texts. A sample of the portions quoted in the Sīmānayadappana showed that Dhammālaṅkāra quoted this text as the third "formal letter" (sandesapaṇṇa) of the Saṅgharāja.

The fact that this manuscript is made accessible by BUDA now allows me to edit and translate this text, and thus to widen our perspective on this important aspect of the legal dispute of the 1860s.

Without the texts made available by BUDA this would not have been possible, and the true content of the manuscript would probably have remained hidden for some time.

Read more from Dr. Petra Kieffer-Pülz on the monastic boundary.