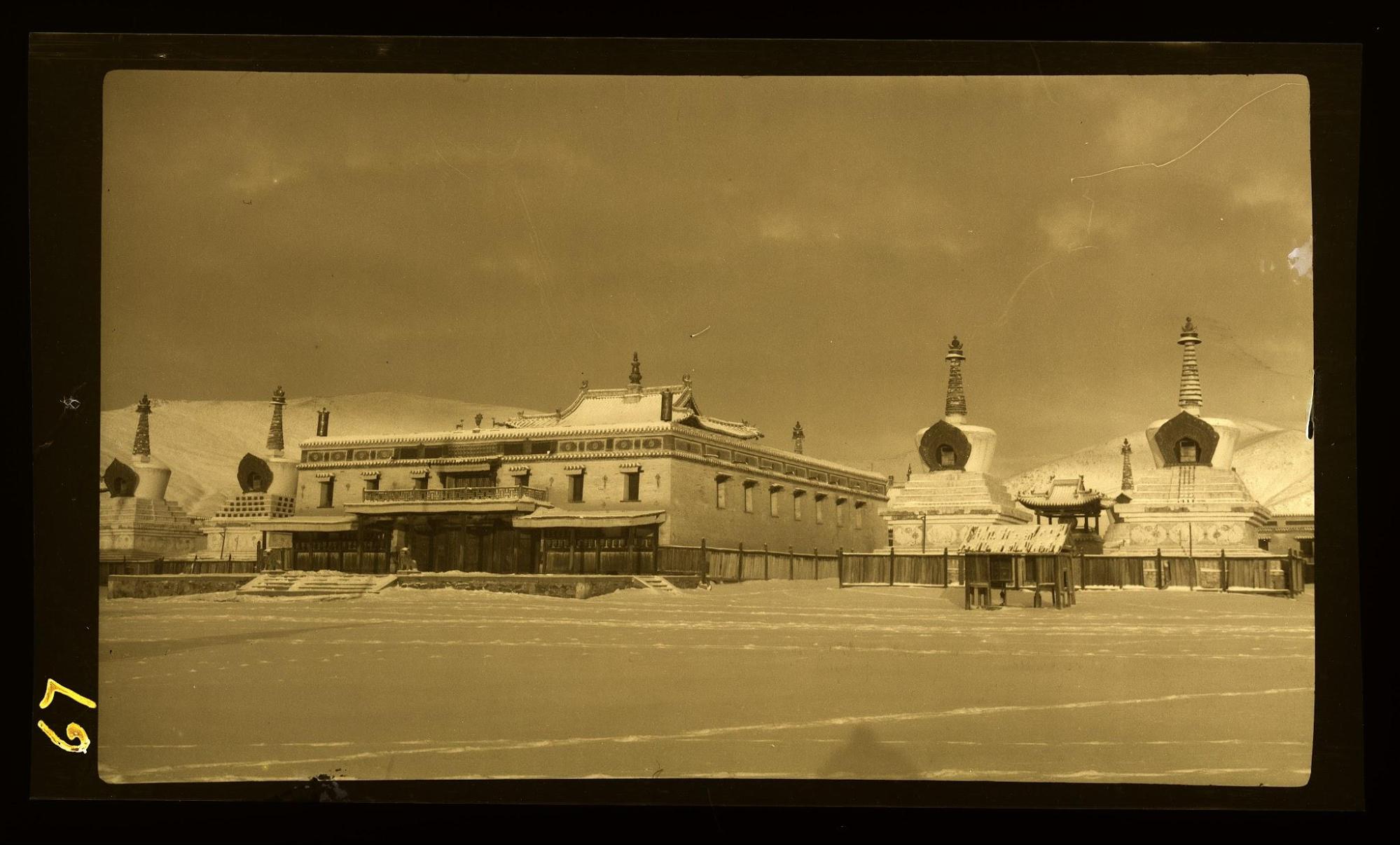 Баянхонгорын хүрээ / Bayankhongoryn Khuree, BDRC G2KR40 in 1927, recorded in the DOMM database. Picture from the Mamen Family collection, held at the Kulturhistorisk museum in Oslo, made available under the CC-BY-SA license on Unimus.no.

The BDRC database is an exceptional source for Inner Asian Buddhist writings and history. Over the last twenty years, we have compiled the largest online digital library of Tibetan-language Buddhist texts and an extensive database of persons and places connected with this literature.

Today, we're introducing a major new addition to BDRC's geo-data for Buddhist sites in the Inner Asian world, thanks to generous data sharing by the "Documentation of Mongolian Monasteries" project, recently featured on the Digital Orientalist) and Dr. Isabelle Charleux. This partnership was facilitated by Elie Roux. For many centuries a constellation of Vajrayana Buddhist monasteries and printeries spanned much of Inner Asia (Amdo, the steppes of Mongolia and Manchuria, Northern China and parts of the Russian Federation). While many of these institutions no longer exist, they are still present in oral histories and historical records, including the texts produced at the monasteries. This enduring presence of Inner Asian Buddhist sites is now made more visible to the world through the addition of over a thousand new locations on BDRC's maps. Over time these locations will become even more dynamic as we begin to link them with texts written or printed at these sites. 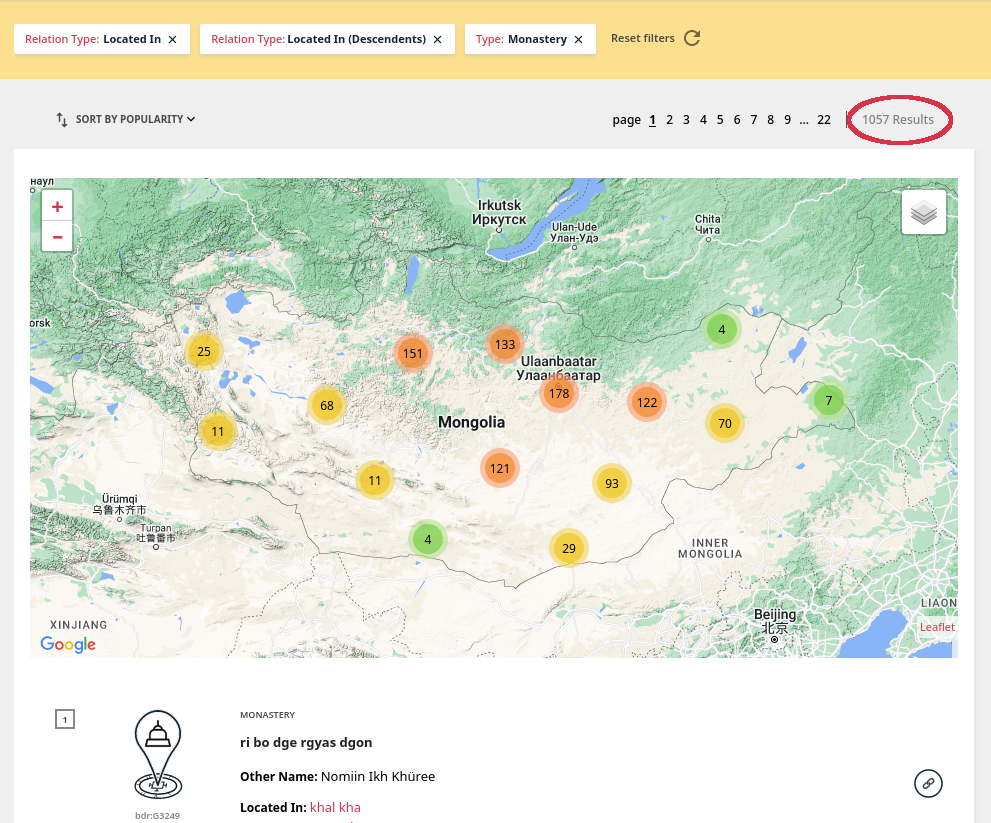 The impetus for enhancing our data on Inner Asian Buddhist sites is an on-going project to digitize the collection of texts in the Tibetan language at the National Library of Mongolia (NLM) in Ulaanbaatar. This is one of the world's greatest collections of accessible Buddhist books, comprising over thirty-thousand manuscripts and xylographs. The NLM has been incredibly farsighted and generous in digitally preserving their collection and making it available for free to practitioners and researchers around the world through BDRC's BUDA platform. BDRC is honored to carry out this project in partnership with the Asian Legacy Library (formerly Asian Classics Input Project), with funding from Khyentse Foundation, a peerless Buddhist philanthropic organization. The chief objective of the NLM is to preserve and make accessible Mongolian literary heritage for Mongolians in order to promote cultural sustainability and foster scholarship. One of the ways we can facilitate discovery and research for Mongolians and others who are exploring the NLM Collection is to imbue it with authoritative geo-data about relevant Buddhist sites in Inner Asia.

Until last week, most of BDRC's records of Inner Asian monasteries were derived from Karl Ryavec's A Historical Atlas of Tibet (2015). We are very grateful to Ryavec, who provided us with this data in 2013, and all the contributors of the book for their valuable work.

Additionally, BDRC produced several place records based on information in colophons of texts printed in Inner Asia. Unfortunately, a lot of this legacy data was lacking Tibetan names and GIS coordinates. That made proper identification of places quite difficult. 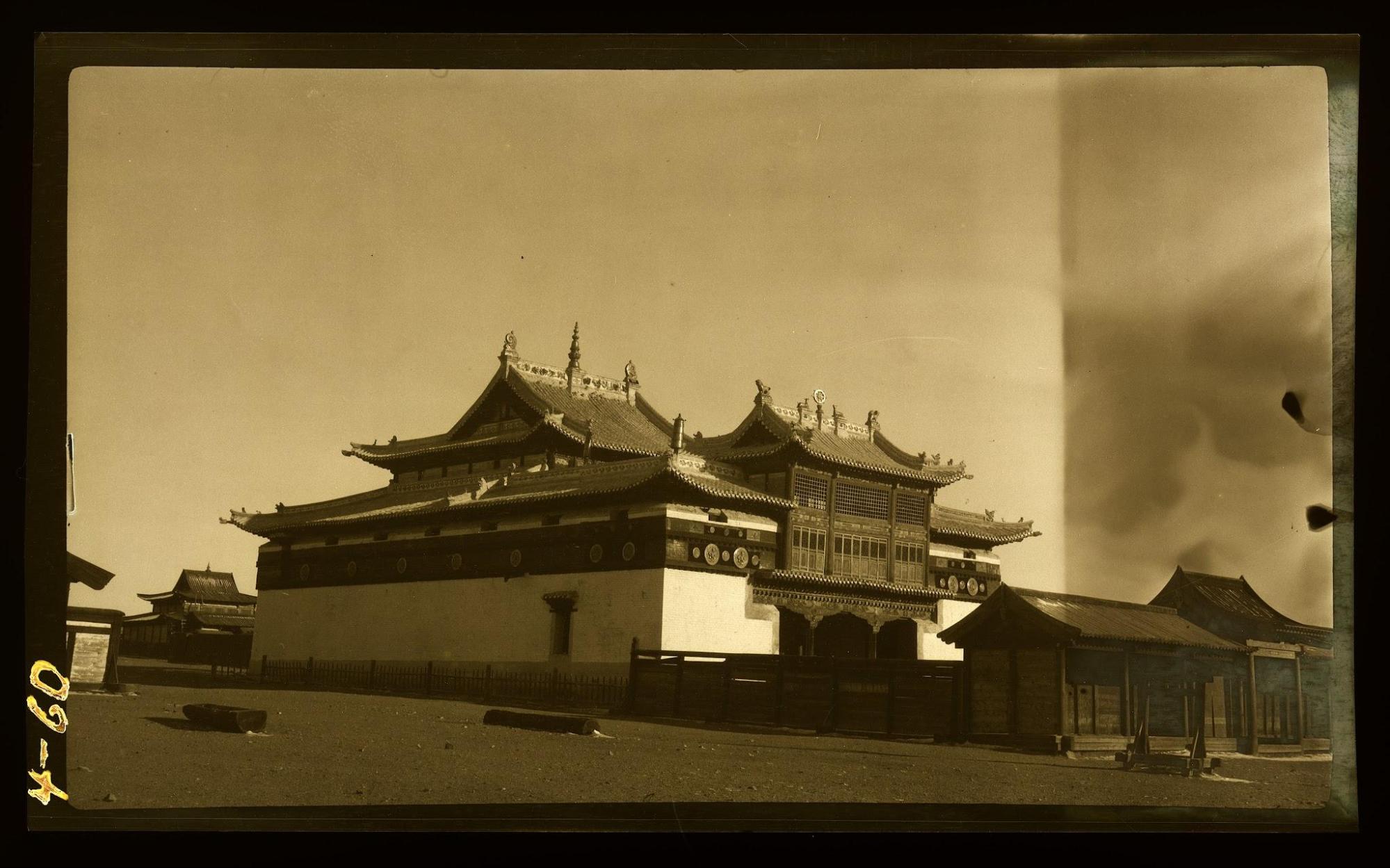 Түдэв гүний хүрээ / Tudev gunii khuree, BDRC G1DOMM0140 in 1927, recorded in the DOMM database. Picture from the Mamen Family collection, held at the Kulturhistorisk museum in Oslo, made available under the CC-BY-SA license on Unimus.no.

In order to properly identify and map Buddhist monasteries in the region, BDRC has partnered with DOMM, which is by far the most prolific and accurate source on monasteries in Mongolia. DOMM started in 2005 as a very ambitious documentation project in partnership with the Arts Council of Mongolia and the National Archives of Mongolia. Their integrated methodology involved oral interviews with former residents of Mongolian monasteries; field surveys and manual gathering of GIS coordinates; and regrouping of data published in secondary sources. We thank Sue Byrne, the director of the project, for making the data available on BDRC with due attribution.

Dr. Isabelle Charleux (CNRS, Paris), a  leading authority of Buddhism in Inner Mongolia, kindly authorized us to import the data from her magisterial book Temples et monastères de Mongolie-Intérieure and helped us transform her data to use BDRC's model.

Thanks to the contributions from DOMM and Dr. Isabelle Charleux, here are the new additions to BDRC's geo-data for Buddhist sites in the Inner Asian world. We added a new map functionality, allowing us to group the monasteries together!

To give an example of the unprecedented research potential of BDRC's database for Inner Asian Studies, hundreds of the texts in the NLM collections have stamps on their title pages that indicate the monastic or personal collection to which the text traditionally belonged. The stamps and colophons of these texts offer phenomenal clues about the provenance of the texts but full understanding requires data cleanup of the names and confident identification with known geographic sites. Bringing together the authoritative geo-data now available on BDRC and the thousands of volumes of full-color scans of texts from the NLM, scholars now have the mapping tools and primary resources to do groundbreaking research into the history of Inner Asian book culture like never before. The NLM manuscript below bears two stamps with a distinctive image and the name ri bo dge 'phel chos mdzod gling but at present we don't know exactly what place this name refers to. We are optimistic that scholars who have access to the extensive data on Inner Asian monasteries along with scans of multiple volumes bearing this same stamp will be able to add an important piece to the puzzle of Inner Asian cultural history. Needless to say, we have already made many positive associations between the information in colophons and places in our database. In this example, the printery dga' ldan theg chen gling named in the colophon is identified with BDRC G507.

From Buryatia, BDRC has many xylographs, especially in the Lokesh Chandra collection. The unique collections of texts scanned in Buryatia by the Endangered Archive Program (EAP813 and EAP1034) will also be soon made available on BUDA. They include full-color scans of the Cone Kangyur (the same edition of the Tibetan Buddhist canon as the one scanned by Susan Meinheit at the Library of Congress!).

Although this import of new geographical data is an immense step forward, challenges remain:

Many monasteries have multiple monastic colleges (grwa tshang), each with their own Tibetan name; but very few of these institutions within institutions have been cataloged. 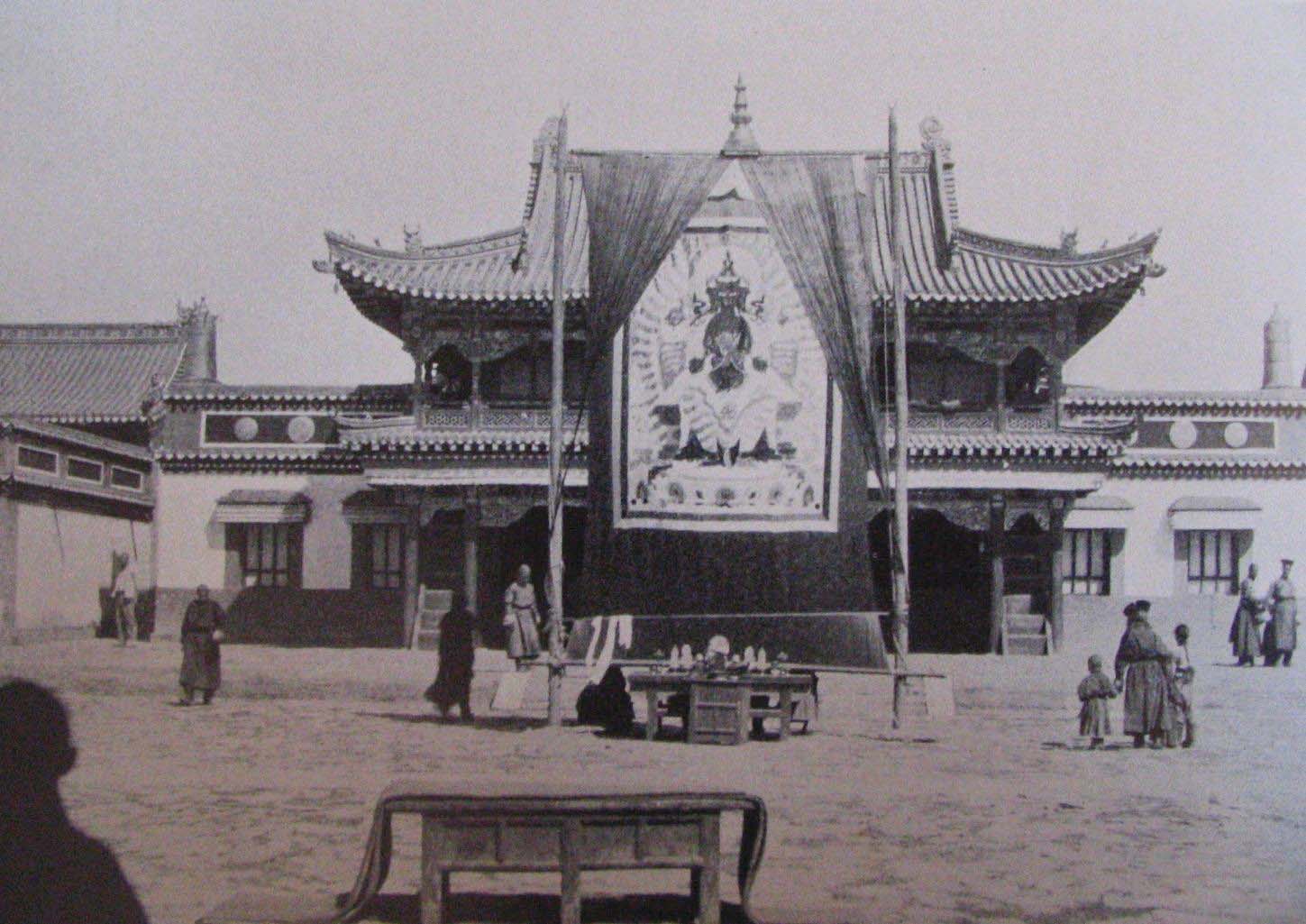 BDRC's founder E. Gene Smith was deeply interested in Inner Asian Buddhist history – he studied Classical Mongolian at the University of Washington in the early 1960s – and our archive has long contained key works in Mongolian and Manchu, and dozens of volumes in Tibetan composed by Inner Asian lamas. The NLM digitization project and this incorporation of Inner Asian place data would have delighted Gene. In building upon one of his many specialities in Buddhist Studies, the work documented above represents a significant advance towards realizing the ecumenical vision of Buddhist Digital Resource Center.