Women's Works in the BDRC Archive

In 2017, when a group of dedicated nuns in Tibet published an unprecedented and groundbreaking anthology of Tibetan women's writing, its reverberations were felt far and wide. Because the vast majority of writers, teachers and scholars, and publishers for that matter, thus far had been men, it was one of the most exciting and inspiring events in the annals of Tibetan Buddhist literature. 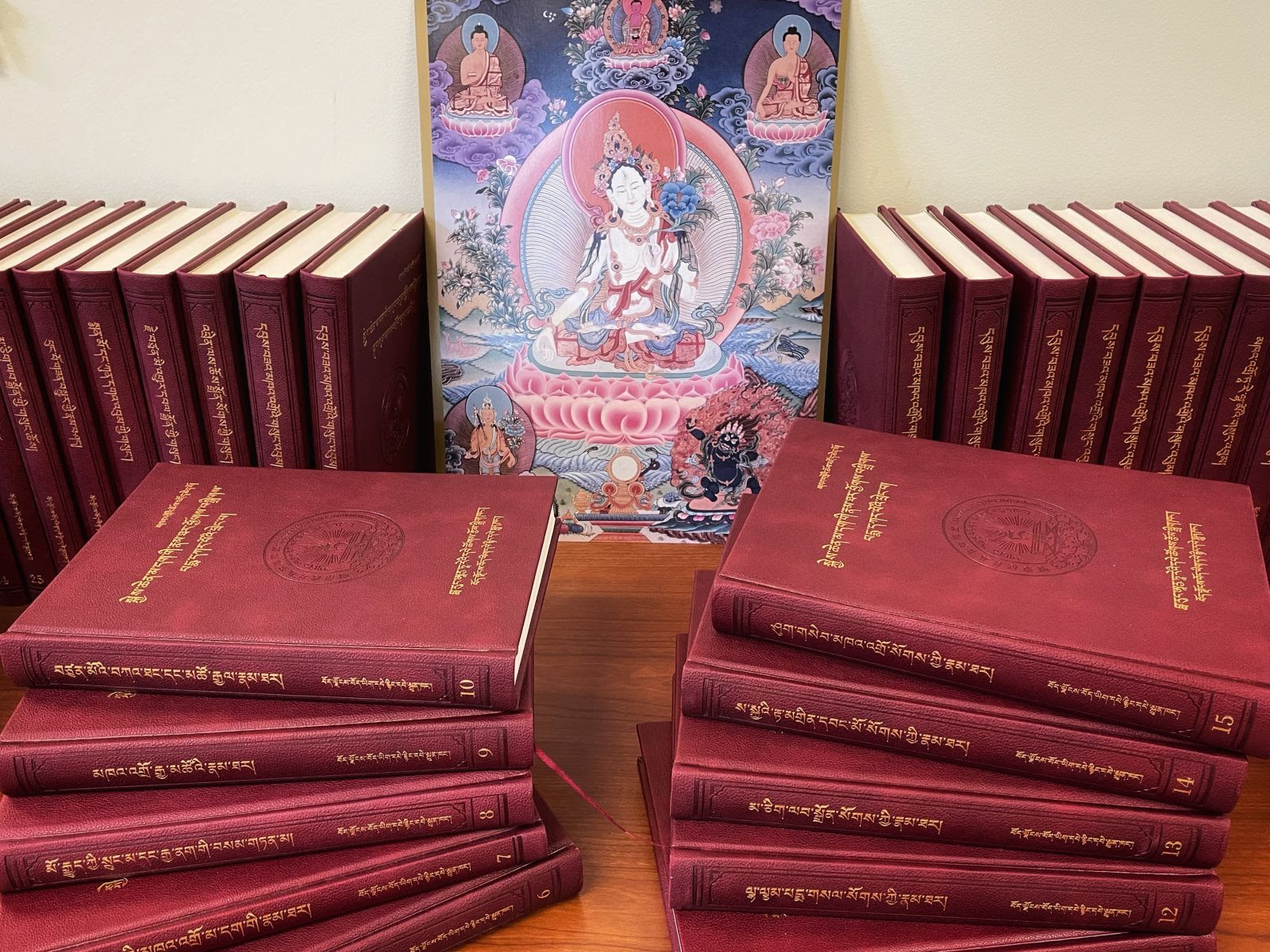 The Dakinis' Great Dharma Treasury, or མཁའ་འགྲོའི་ཆོས་མཛོད་ཆེན་མོ། as this small library of 53 volumes of texts by and about Tibetan women is known, showcases the overlooked brilliance of Buddhist female masters from Tibet through the centuries. By spotlighting women's contributions, this 53 volume Treasury goes a long way towards rectifying the inequality and comparative invisibility of Tibetan women in history.

BDRC is delighted to announce that recently we were able to make all of these precious volumes available to the entire world through our online archive. We want to thank Sarah Institute of Higher Tibetan Studies, one of our partners, for providing us with the scans. Our digital archival staff and our librarians worked hard to process these images and to catalog the texts in record time. It is our great privilege to make this wonderful and important collection available to the world so that all can have access to the genius and brilliance of Tibetan Buddhist female masters. We have made a detailed outline of the entire Treasury for anyone to browse and see at a glance the contents of the collection.

We have a searchable and navigable detailed outline of the Dakinis' Great Dharma Treasury, མཁའ་འགྲོའི་ཆོས་མཛོད་ཆེན་མོ།

We have all 53 volumes of this Dharma Treasury on display in our office. We are grateful to Professor Holly Gayley for sending us the entire physical collection.

Part of our inspiration and urgency in cataloging the Dakinis' Great Dharma Treasury in record time was the second Lotsawa Translation Workshop held at Northwestern University earlier this year, from October 13-16. The theme of this year's Lotsawa translation and transmission workshop was "Celebrating Buddhist Women's Voices in the Tibetan Tradition."

Here is how the organizers described their reasons for convening this very significant conference: "Until now the stories, voices, and concerns of Buddhist women in Tibet have been difficult to locate and translate in order to make their perspectives available to contemporary Buddhist communities in the west. A key impetus for the second Lotsawa Translation Workshop comes from the Buddhist nuns at Larung Gar in eastern Tibet who recently published a groundbreaking compilation of 53 volumes of writings by, for, and about Buddhist women in the Tibetan language. Titled the Ḍākinīs' Great Dharma Treasury (Mkha' 'gro'i chos mdzod chen mo) and published by the Ārya Tāre Publishing Committee in 2017, this compilation opens up new horizons for the translation of Buddhist texts from Tibetan."

As the organizers wrote, "Inspired by the Ḍākinīs' Great Dharma Treasury, the theme of this Lotsawa workshop is translating Tibetan texts by and about women across time periods, including a wide array of genres and time periods ranging from classical Buddhist texts to modern Tibetan women's writings." It was a very active and engaged conference, geared towards translators, with interactive sessions and workshops focused on the practical art and craft of translation.

BDRC was very well represented at this workshop. Executive Director Dr. Jann Ronis gave a resource presentation and unveiled the entire Dakinis' Great Dharma Treasury, which is now online with a detailed outline on our archive. Communications Officer Tenzin Dickie gave one of the keynote addresses and Senior Librarian Kelsang Lhamo sat on a panel on Tibetan Buddhist women. Both Jann Ronis and Kelsang Lhamo were readers for the translation workshops.

BDRC's Key Role in the Transmission of Texts

At BDRC we have always valued and sought out writings by Buddhist women. Indeed for a long time writings by women were not widely published in the Tibetan community and BDRC was one of the only places to access many of them.

This meant that when the nuns at Larung Gar wanted to compile their unprecedented anthology of Buddhist writings by and about women, they were tireless in seeking out texts from all over Tibet as well as the broader world, and they turned to BDRC for many of their source texts. We are humbled to have played a small role in this extraordinary collection.

We want to highlight just a couple of texts from the collection. The Namthar of Ache Rigtong Gyalmo (a lce rig stong rgyal mo'i rnam thar) contains autobiographies of two not very well known yoginis called Rigtong Gyalmo and Metok Seldon. We believe they should certainly be better known! The Namthar of the Great Mother Lhazin Yangchen Drolma (yum chen lha 'dzin dbyangs can sgrol ma'i rnam thar), by Lochen Dharmaśrī, is about his mother, the 17th century female master Yangchen Drolma, important not just as the mother of Mindrolling masters Dharmaśrī and Terdak Lingpa but in her own right as a teacher. Because it was a very special and rare text that no one else had, we even shared this text with Mindrolling Monastery in India who then reprinted it. Interestingly, this hagiography of Yangchen Drolma is only 17 pages long and missing the 18th and last page, as seen here.

The Namthar of the Great Mother Lhazin Yangchen Drolma in our archive.

We hope that you will dig deep into this Dakinis' Treasury, which is full of precious jewels like these.

For anyone interested in seeing our entire collection of texts authored by Tibetan women, we are happy to announce that you will be able to view and read them here at this link for Tibetan women authors.

The BDRC online archive, with its tens of thousands of texts and treatises, is entirely open and accessible to Buddhist researchers and practitioners. Our archive is always at the disposal of Buddhist publishers of all kinds. We are delighted that Tibetans are able to draw on our vast archive in order to preserve, promote, and enrich Tibetan Buddhist literature.