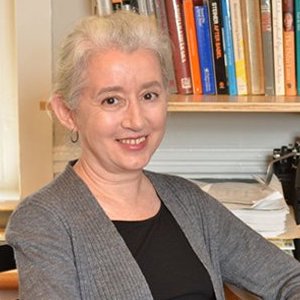 Janet Gyatso holds the Hershey Professorship in Buddhist Studies in the Divinity School at Harvard University. Before coming to Harvard, she taught for 14 years at Amherst College from 1987-2001. She has also served on the visiting faculties of State University of New York at Stony Brook, Wesleyan University, University of Michigan at Ann Arbor, and as Numata Professor at Harvard University's Center for the Study of World Religions.

Prof. Gyatso received her Ph.D. from the University of California at Berkeley in the department of South and Southeast Languages and Literatures with a dissertation on Thangtong Gyalpo and the visionary tradition of Tibetan Buddhism. She has studied extensively with living exponents of the Tibetan tradition, including Thartse Shabdrung Rinpoche, Deshung Rinpoche, Kalu Rinpoche, Drubtob Rinpoche, and Khenpo Sherab Palden.

Her major monograph is Apparitions of the Self: the Secret Life of a Tibetan Visionary, about the autobiographies of the Dzogchen master Jigme Lingpa. She is co-editor with Hanna Havnevik of a collection entitled Women in Tibet (Columbia University Press). She also edited and contributed to a volume on memory in Buddhism, In the Mirror of Memory: Reflections on Mindfulness and Remembrance in Indian and Tibetan Buddhism (SUNY Press).

Prof. Gyatso was president of the International Association of Tibetan Studies (IATS) from 2000-2006, and is general secretary for the Americas of the International Association of Buddhist Studies (IABS). She is also co-chair of the Buddhist Studies section of the American Academy of Religion. She serves on the editorial board of both the Encyclopedia of Religion and the Journal of the American Academy of Religion. She is a member of the advisory board of the Rubin Museum of Art, member of the editorial board of the monographic series Buddhisms at University of California Press, and of Studies in Indian and Tibetan Buddhism of Wisdom Publications.

Her special interests center on distinctive forms of Tibetan religious culture. She has written on revelatory transmission, issues of authorship, autobiographical writing, and notions of experience in Tibetan traditions and on conceptions of sex and gender in Buddhist monastic law. Her book on Tibetan medicine Being Human in a Buddhist World: An Intellectual History of Medicine in Early Modern Tibet was published by Columbia University Press in 2015.