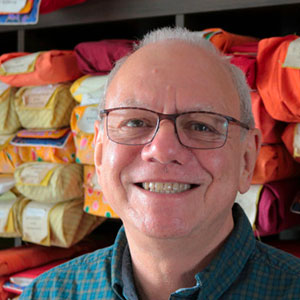 Jim Katz is a lifelong New Englander who moved to Boston to pursue a music career, but found software development a more difficult, yet more relevant challenge.

Earning his BA in Computer Science from University of Massachusetts, Boston in 1985, he began software development in the twilight of the minicomputer era. Since 2000, he has developed and created web applications in finance, government, and life sciences, acting as a team lead and manager at several points. He recently designed and implemented a workflow management platform for translation of an online clinical library into Mandarin.

A long-time practitioner in the Shambhala lineage, Jim has assisted and consulted on some of their internal IT projects. After consulting for BDRC in 2017 to work on uploading BDRC's holdings to Harvard University's digital archives, he joined BDRC full-time in 2018 to facilitate the coordination of BDRC's technical activities.

Jim sees the chance to strengthen the internal operations of BDRC as an auspicious opportunity to repay and continue the devoted work of those who make these profound treasures available.