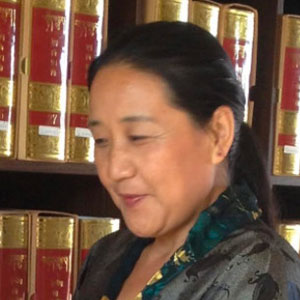 To pursue further studies, she left for India in 1989. She received novice vows from His Holiness The 14th Dalai Lama, and for a period of ten years studied and received Geluk teachings, mainly from Geshe Drubthob Rinpoche and many other masters. At the same time she studied Hindi language and the Vedas in Varanasi.

Kelsang moved to USA in 1999 and for a period of several years taught Tibetan and Buddhist philosophy to the son of Sogyal Rinpoche. During this time she also translated Sogyal Rinpoche's The Tibetan Book of Living and Dying into Tibetan language with Ringu Tulku. In 2003, with the kind support of Alak Zenkar Rinpoche and Tashi Tsering Josayma, Kelsang joined the Buddhist Digital Resource Center (BDRC), formerly the Tibetan Buddhist Resource Center (TBRC). Under the guidance of Gene Smith, the founder of BDRC, she continued her study of Tibetan literature. Kelsang has taught Tibetan language and literature to many students. At present she is working as Librarian and cataloger at BDRC.