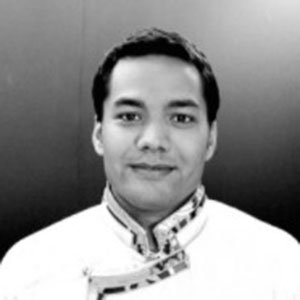 Ngawang Trinley was born in a mountain farm in Provence, France. As a young child, he was enrolled in a Buddhist school there, where he also looked after cows for several years. When he was 16, he left behind his cows and went to India to study Tibetan language, philosophy, medicine, and Kalachakra cosmology and astronomy.

After eight years of study, he was encharged with the library at the College of Buddhist Sciences in Sherabling, where he also taught Tibetan language to Tibetan monastics. The following years, he was a lecturer (in Tibetan) for cosmology and astronomy. This work was instrumental in introducing modern teaching methodology to the college; due to the positive results, those teaching methods continue there to this day. Beyond that, Ngawang Trinley was involved as the editor and publisher of the yearly almanac and over 15 Buddhist books on medicine, astrology, grammar, poetry, and caligraphy for the monastery, while also translating English-to-Tibetan for astronomy papers and portions of anatomy textbooks.

Ngawang Trinley co-founded Esukhia in 2009, where he is currently the director of the branch in India; he also serves as a member of the Board of Directors. As the Executive Director and co-founder, he's involved in every aspect of the organization, including but not limited to: project oversight and direction, such as for the proofreading and editing of the digital edition of the Derge Kangyur for the 84000 initiative; grant and project proposals; media relations; translation, transcription, and other editing/proofreading projects; supervision of the creation of translation tools, such as a real-time collaborative online environment for translation work, proofreading software and tools, and a Tibetan language spell-check; the development of teaching Tibetan as a Second Language; and much more.

Moreover, he's participated in, and spoken at, several conferences held in the Tibetan language. He has also been an invited guest to other meetings of import, such as those held by Khyentse Rinpoche at the 2012 meetings of the Khyentse Foundation in Bodhgaya.

As the digitization project manager, NT is in charge of digitizing texts (scans and etexts) and creating and maintaining relationships with users and partners.