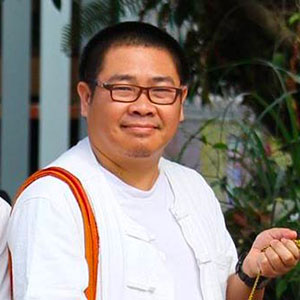 Tom's first major job in Bangkok, after moving to the city from Kamphaeng Phet, the province where he was born, was as a file clerk at the Orderly Departure Program for Vietnamese refugees, which operated under the auspices of the Embassy of the United States. He worked at this from 1990 until 1998.

After the contract for that project expired, Tom worked with Peter Skilling helping to arrange and scan palm leaf manuscripts of Buddhist materials from Myanmar for Reiyukai , a Japanese foundation with offices in Kathmandu, Nepal. This work continued for ten years until the operation was taken over by BDRC in late 2016. Tom is currently a manager Scanning at BDRC, overseeing a staff to clean, process and scan manuscripts for the BDRC Project.