Jann Ronis brings to BDRC a strong background in Buddhology, pedagogy, and the digital humanities. He received MA and PhD degrees from the University of Virginia, where he researched the history of the Tibetan kingdom of Dergé in the seventeenth and eighteenth centuries, and particularly the local Nyingma monasteries. In recent years, his research interests have expanded into the fields of literary analysis and contemporary Tibetan culture. Jann is fluent in both classical and spoken Tibetan, including both the Central and Kham dialects, and is highly proficient in Mandarin Chinese.

Jann's love for the study of Buddhism began with the Antioch Buddhist Studies study abroad program in Bodh Gaya in the Fall of 1995. He began learning spoken and literary Tibetan the following year in Kathmandu while a student with the University of Wisconsin's College Year in Nepal program. After completing his MA degree, he took his first trip to Tibet during the summer of 2000, traveling alone in Kham. In 2001, he spent the summer in Lhasa with a team from the Tibetan and Himalayan Digital Library (now known as the Tibetan and Himalayan Library), which kicked off his long involvement with digital humanities initiatives. 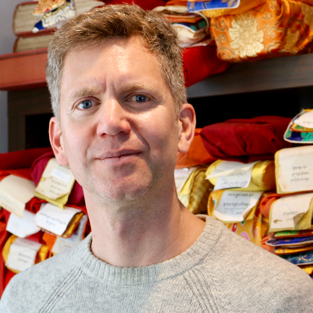 In 2005, fresh from 18 months in Beijing and Kham on a Fulbright doctoral research grant, Jann joined TBRC as a scholar-in-residence. He worked closely with BDRC's founder, E. Gene Smith, and Jeff Wallman (TBRC's Executive Director Emeritus, who was Director of Technology at the time), to develop the first iteration of TBRC's outlines, which remain the primary template for TBRC's metadata.

"As Executive Director, Ronis is excited to expand BDRC into a truly pan-Buddhist resource, with enhanced digital tools and expanded literary holdings from around the world…"

Jann moved to Berkeley in 2011 to assume the position of Shinjo-Ito Postdoc in Buddhist Studies at University of California, Berkeley, for two years. He then stayed on at UC Berkeley as Lecturer of Tibetan Studies for five years.

As Executive Director, Ronis is excited to expand BDRC into a truly pan-Buddhist resource, with enhanced digital tools and expanded literary holdings from around the world.