If you have any questions not covered by our User Guide and/or the FAQs below, please email [email protected] with your question and we will do our best to assist you.

What do I need to do to make a library account on BDRC?

I have an account on tbrc.org but my tbrc.org username and password do not work on library.bdrc.io. How can I fix this issue?

For access to copyrighted texts, please refer to our access policies for more information about what we are allowed to share under copyright law. Some copyrighted material is available on a limited basis via our partnership with Internet Archive. For other special access questions, please write to us at [email protected] with more information describing your access level on tbrc.org and the reason why you had it. Our staff will manually process your request and determine your eligibility for special access. We may be able to provide special access to some scans but we cannot provide unlimited access to BDRC's entire collection.

Some works are restricted by BDRC and not available to users, or only available on a limited basis, even when you are logged in. Common reasons for restriction include:

You can read more about our access policies here. BDRC's twin goals of preservation and access mean that we recognize the need to preserve materials we cannot make accessible yet. If you see a work in our library that should be restricted according to one of the above categories but isn't, please contact us at [email protected] to let us know.

What's the difference between a Work and a Version?

In brief, a Work is conceptual and a Version is a specific representation of the concept contained in the Work. You can learn more about how BUDA uses Works and Versions, and how to improve your searches, here.

BDRC's new Work and Version model follows BIBFRAME2.0, which is becoming the new standard in library catalogs. Some minor differences may appear but in general:

A Work is often linked to multiple Versions. Given the number of records in our library, BDRC's migration to the new model was made automatically and some errors may exist; feedback is most welcome.

How do I find people associated with a particular monastery? This feature showed up very clearly on tbrc.org and I am having difficulty finding it in BDRC's new library.

The bottom of a particular Monastery Page, Drepung (G108) for example, will have a Related Resources hyperlink that will allow you to view various data types associated with the institution. For instance, you can view Associated Persons, Associated Places, Associated Works etc. Regarding Associated Works and Versions, you can even refine the search to view texts published by a particular institution or printery, for instance, Drepung Monastic Printery. This feature still needs fine-tuning and we need to add more data, but it is an available feature on the new site. 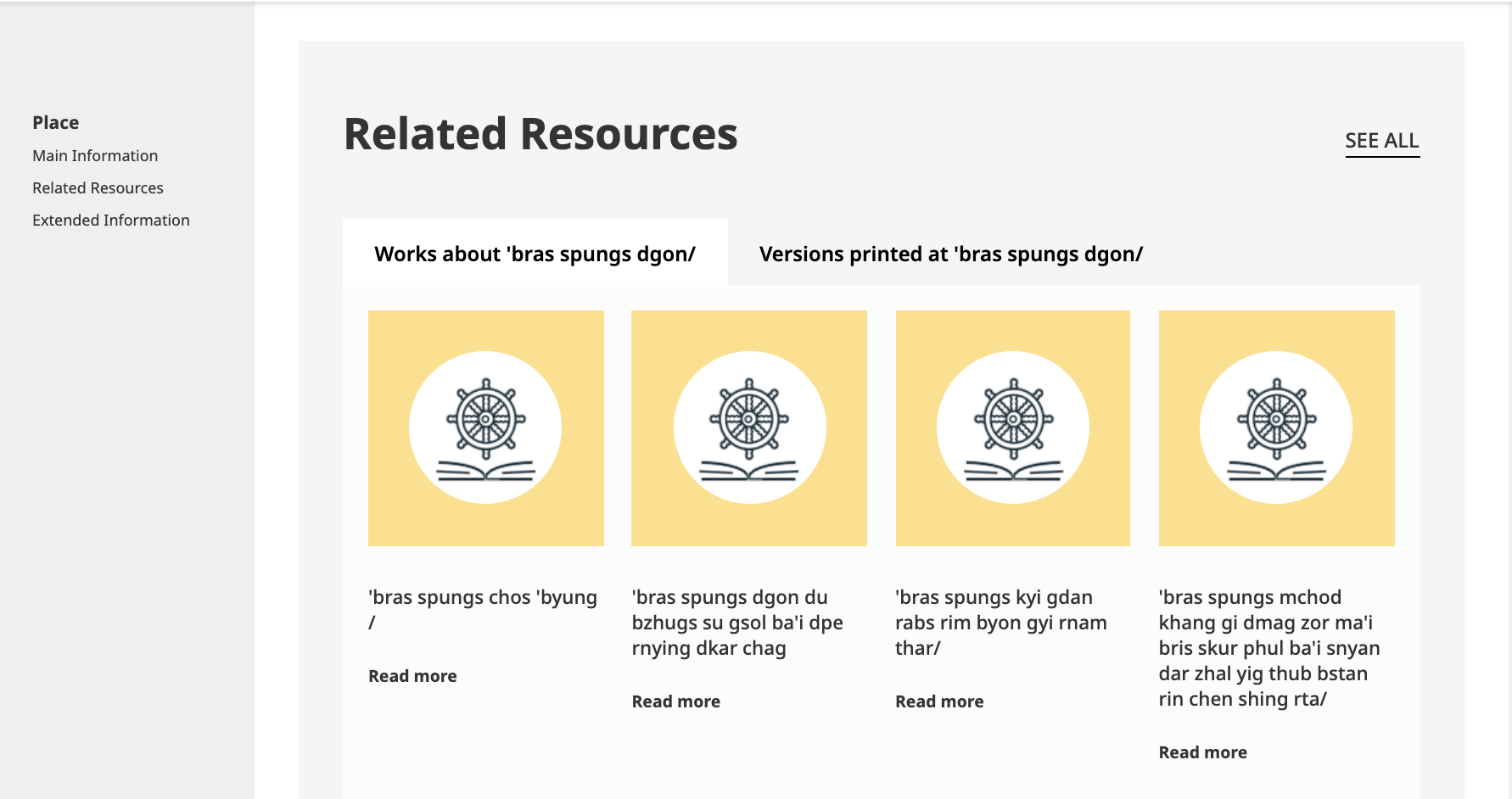 How can I find the e-text of a particular text?

BDRC's corpus of e-texts is made up of "born digital" e-texts that were typed into the computer as well as e-texts that were generated by OCR (Optical Character Recognition). As e-texts allow readers to search specifically within a text for a word or a string of text, we do our best to generate new e-texts to facilitate your search.

I simply can't find the text I am searching for. I have tried Wylie, Tibetan, and English in various iterations. What do I do now?

When I try to open up a text, the scans don't show up. The pages are just blank and don't load at all. How can I fix this problem?

Please try logging out of your BDRC library account, clearing your cache, and logging back in. To clear your cache in:

On tbrc.org, you had a list of topics that was browsable. How can I find topics and refine my search by topics on your new site?

As mentioned in the User Guide, you can search Topics from the main search bar by selecting "Topics" from the drop down menu and typing in the name of the topic you wish to search. On the search results page, you can also refine any keyword search according to Genre/Topic using the filters on the left-hand side of the page.

However, if you wish to search or browse a pre-selected list of topics, you can do so here. We are currently working on an improved interface for browsing the list of topics.

What will happen to bookmarked tbrc.org URLs?

For user purposes, the Work IDs remain the same (with the addition of "bdr:" as a prefix). Other BDRC IDs, such as IDs for Person, Place, Lineage, Role and Corporation also remain the same. Searching for ID numbers such as P64, G108 or W8LS27883 will pull up the same record in library.bdrc.io as they did in tbrc.org.

On BUDA, you might notice several new prefixes that appear with ID numbers. These prefixes correspond with different categories in BDRC's bibliographic model. ID numbers that begin with MW (e.g. MW2PD20323) refer to Versions of a Work and, in the vast majority of cases, correspond with one set of images. Records on tbrc.org that had an "O" prefix (Outline) have been mapped to MW IDs on library.bdrc.io. The prefix WA (e.g. WA4CZ16799) is used to denote Works in BDRC's bibliographic model.